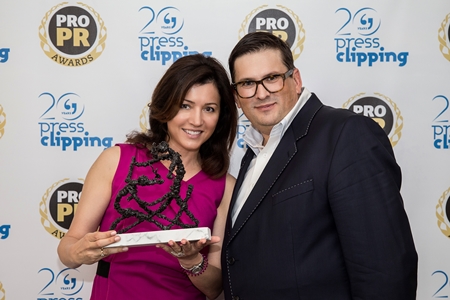 Mrs. Bienenfeld has been rewarded for her contribution to better image and perception of Zagreb, which she and her team accomplished by using communication tools on all levels. Thanks to new strategy and projects, Zagreb has gained enormous publicity all over the world.
So far, PRO PR Vision Manager Awards were given to  Jože Mermal, President of the Board of BTC (Slovenia), Edhem Fočo, General Director at Al Jazeera Balkans (Bosnia and Herzegovina), Darko Šket, former President of the Board at Pevec ( Croatia), Emil Tedeschi, President of the Board at Atlantic Group (Croatia) and Esad Zaimović, President of the Board at Hipotekarna Banka (Montenegro).
PRO PR Awards program was established 2012 on occasion of the celebration of the 10th anniversary of PRO PR Conference, the first international public relations conference in South East Europe.
Skip back to main navigation
Ova stranica koristi kolačiće: Saznaj više.