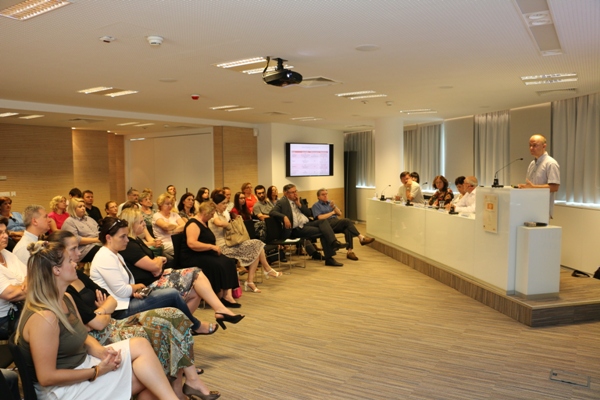 „The future of wages in the public and government agencies“

As part of the European Social Fund project „ Strengthening social dialogue – bipartite and tripartite contribution to the process, a panel discussion „ The future of wages in the public and government agencies“ was held.

The discussion was  organized by the Association of Croatian Syndicate  with the aim of contributing bipartite and tripartite processes, and strengthening of social dialogue as a whole in the Republic of Croatia.
The discussion was opened by Ph.D. Dragan Bagić, presenting a comparative analysis of collective agreements in the public and state services and the economy. About the future of wages in public and state sector in a panel discussion spoke Krešimir Rožman, an expert in the field of labour law and editor of Labour law magazine, representative of the Ministry of Labour and Pension System Irena Cvitanović, executive secretary for social dialogue and public policy of the Alliance of Independent Croatian Unions Ana Miličević Pezelj and Vilim Ribić, the president of the Association of Croatian Syndicate.
Dragan Bagić presented the results of the analysis of more than 200 collective agreements in the public sector and the economy, which has shown that in these two sectors there is no substantial difference with different accessories and material rights. The survey showed that the biggest difference is between the rights of those who do not have a collective agreement and those who have them and stressed that public demands for a drastic restructuring of the rights of public employees are unjustified.
Krešimir Rožman referred to the regulations and laws related to collective agreements, stressing that there is a problem of application and interpretation of the regulations. "The government does not respect international agreements nor collective agreements signed by itself," said Rožman, and concluded that the trade unions could trust only in themselves through strikes, protests, petitions and the media, as the laws and regulations are violated. Irena Cvitanović emphasized the importance of the role of social dialogue to ensure the protection of workers' rights and started the debate on violations of collective agreements guaranteed rights by employers. The most common example of non-compliance with the rights of states is the non-payment of overtime compensation.
Executive Secretary of the Alliance of Independent Croatian Unions pointed out that workers suffer a breach of contract and the law, and employers knowingly violate the law. Employers count on the slowness of the judiciary and the fear of losing their jobs due to which employees often do not decide on the lawsuit. She mentioned that underpayment and existential threat are the biggest reason of mass emigration of young people.
President of the Association of Croatian Trade Unions Vilim Ribić in his speech initialy wondered where is the media when it is necessary to convey the truth. This is the second time that they held a public meeting on this subject, and that the media response is absent, suggesting that the media, with the judiciary and politics, is an instrument of struggle against the interests of workers. What remains is the workers struggle to protect their rights.
The only instrument that can pull the country out of the crisis is the wage growth that will lead to an increase in aggregate spending, but unfortunately the policy is not aimed at increasing the standard of living and increase production but the primary goal is to repay debts to financial usurers. Future salary in the public service now is uncertain since it depends on the activation of the Agreement on the basis of salaries in the public services on which the executive has not paid attention, and will not now, when collapsed, concluded Ribić.
Project manager Lucia Barjašić Špiler stated that the project was implemented because they wanted to see what is the position of workers in the state and the public sector,  to 'demystify thesis that public sector employees are privileged in relation to employees in the economy. She pointed out that the objective of the analysis was to help and contribute to the bipartite and tripartite processes, and strengthening social dialogue in Croatia.
For the month of September they announced a round table which will show the results of the analysis of research on the subject of working time.
Skip back to main navigation
Ova stranica koristi kolačiće: Saznaj više.